Series E United States Savings Bonds were government bonds marketed by the United States Department of the Treasury as war bonds during World War II from 1941 to 1945. After the war, they continued to be offered as retail investments until 1980, when they were replaced by other savings bonds. 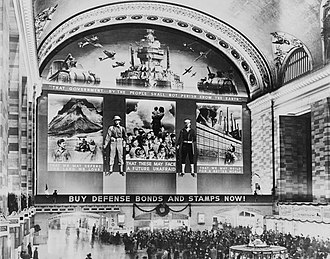 Photo mural promoting the purchase of Defense Bonds, in the concourse of Grand Central Terminal (December 1941)

The first savings bonds, Series A, were issued in 1935 to encourage saving during the Great Depression. They were marketed as a safe investment that was accessible to everyone. They were followed by series B, C, and D bonds over the next few years.

Marketed as a defense savings bond, the first Series E bond was sold to President Franklin D. Roosevelt on May 1, 1941, by Secretary of the Treasury Henry Morgenthau.[1] After the December 1941 attack on Pearl Harbor brought the United States into World War II, Series E bonds became known as war bonds. 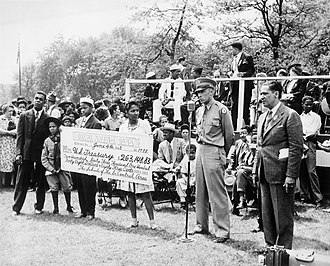 On June 4, 1943, students of the south-central district of the Chicago Public Schools purchased $263,148.83 in war bonds—enough to finance 125 jeeps, two pursuit planes and a motorcycle.

The drive technique used during World War I was replaced in part by a continual campaign using a payroll deduction plan. However, eight different drives were conducted during the campaign. In total, the overall campaign raised $185.7 billion from 85 million Americans, more than in any other country during the war.[2] Lil Abner creator Al Capp created Small Fry, a weekly newspaper comic strip whose purpose was to sell Series E bonds in support of the Treasury.[3]

Kate Smith in September 1944: No single show-business figure even approached her as a seller of War Bonds during World War II, wrote The New York Times. Her grand total exceeded $600 million.[4]

In memory of Roosevelt, a special $200 Series E bond was made available at the beginning of the Eighth War Loan Drive, called the Victory Loan (October 29, 1945).

Series E Bonds continued to be sold as part of the United States Savings Bonds program until June 1980, when they were replaced by Series EE bonds.[10]

Bonds issued from 1941 to November 1965 accrued interest for 40 years; those issued from December 1965 to June 1980, for 30 years. They were generally issued at 75 cents per dollar of face value, maturing at par value in a specified number of years that fluctuated with the rate of interest. Denominations available were $25, $50, $75, $100, $200, $500, $1,000, $5,000 and $10,000. Series E bonds were not transferable, and were issued only as registered paper certificates. The guaranteed minimum investment yield for the bonds was 4 percent, compounded semiannually.[11] Interest was exempt from state and local taxes, but was subject to federal taxes.[12] Series E bonds were sold at 75% of face value and had a 2.9% interest rate compounded semiannually.[13]